It’s been one week since we have left our home base Tilburg and flew to the metropole Shanghai. The flight had been comfortable, but tiring and here we were, 15 of us at 7am in a new city.

Without access most of our common apps and no knowledge about the Chinese language, we were happy to have one our consultants speaking Chinese and helping us out. After a short rest and a well-needed shower, we were off to the centre and had one of China’s famous dishes, hot pot. Which is basically a pot with broth in the middle of the table in which you boil vegetables, meat and fish. It’s not only a fun experience, but definitely a delicious one as well. We also had a quick look at Shanghai’s skyline from the Bund before finally going to bed.

There was no time to rest, as work was awaiting us that Monday morning. While the Shanghai group started doing their research, meeting the Chinese students who will accompany them in the next few weeks and planning interviews, the Japan group had the day off to see the beautiful city of Shanghai.

Their pictures are just a taster of what we’re destined to see in the next couple of weeks. Luckily we had the chance to have a last meal and couple of drinks with skyline view at Bar Rouge before half of the group flew through to Osaka on Tuesday. It’s too bad we don’t get to see each other for around 3 weeks, but we will definitely have something to discuss and the forecast of having
a 5-day holiday in Tokyo at the end of this trip is a good one to have.

The week flew by and by Friday night it was already time to take the train to see Beijing and Kyoto for the weekend. The Shanghai group went on a tour to The Great Wall, which was cloudy but therefore maybe even more majestic, and to the Forbidden City. While the Osaka group went to the Arashiyama Bamboo Grove and visited some beautiful temples. For both groups, the visits were
short, but definitely worthwhile. In the meantime, Monday has started some hours again here, so all there’s left to say is; Until next TIME! 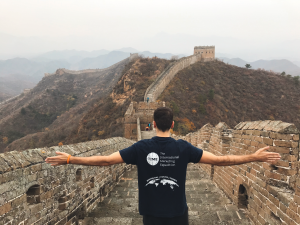