With the start of week 2, we also added another city to the list. While most of the group travelled back to Shanghai Sunday night, Martijn and Kelly stayed in Beijing for further research and several appointments. Besides gaining a lot of new information through almost 10 appointments, both at companies and universities, Martijn and Kelly also gained a new physical skill, a flat-footed squat, also known as the asian squat. Many western people find this way of ‘sitting’ to be uncomfortable but with a bit of practice it does get better!

A lot has happened in Shanghai as well. Willemijn went to many parks and malls to conduct her survey among the Chinese public. And Walter and Annabel flew to Osaka on Wednesday after 1,5 week of hard work in China. Excited for what Japan has in store for them, it was unfortunate to see another part of the group leave for Japan.

We tried to dive into the traditional Chinese culture by going for a traditional Shanghainese dinner at Jian’Guo 328 in Shanghai. A tiny restaurant in a former french concession,

In Japan they celebrated a week of hard work by having dinner and singing Karaoke with the Japanese students they have been working with for 2 weeks.

While the Japan group did not have much time for excursions, as an early morning flight to Tokyo awaited them on Sunday morning, the Shanghai group took the train to Huangshan for a hiking day at the famous Yellow Mountains and ancient village Hongcun. 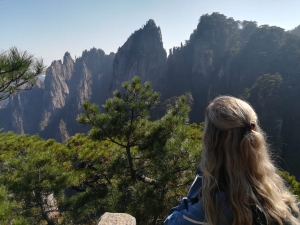 Time flies and before we know it, it’s the third and last full week in Shanghai for the group in China. A lot of progress has been booked over the last weeks and everybody is excited to start the new week. Willemijn will start handing out her surveys throughout parks and malls in Shanghai and Jet has got many appointments with different types of companies which will hopefully give many new insights. Martijn and Kelly got back from Beijing last Friday and we’re very happy to have them back on our team. They’ve had a very successful week in Beijing with many useful interviews for the research, but Shanghai is starting to feel like home and there plenty of information left to find in this gigantic city. Now that we’ve lived through our culture shock, mostly at least, we are starting to enjoy this city more and more. The way this city connects old and new is very impressive and definitely enjoyable to take in. Moreover, we are working with a few new Chinese students this week, which sheds a new light on some researches and gives us a lot of new information on China and her different regions.

The group in Japan is just setting everything up in Tokyo. However exciting it is to be in a new city, it is always a challenge to find your new favorite spots, not to mention trying to understand the public transport. Especially in Tokyo, where the public transport is set up by four different companies, making it quite difficult to understand which card to use and which metro belongs to which network. Luckily, our travel planner Michelle did not only book a hotel at a convenient spot, but also has some prior knowledge of the metro system, as she did an internship in Tokyo before, helping the group big time. But besides getting to know this new city, much knowledge still has to be gained about the different researches as well.

But a week of hard work, subsequently means a weekend of cultural trips, clubbing and everything in between. The group in Shanghai will start their weekend in one of Shanghai’s bigger clubs, The O.C., before going to Hangzhou, a smaller city close to Shanghai known for the famous tea plantations and the beautiful West Lake. In the meantime, the group in Tokyo will take a step closer to finding themselves in an ancient area with many temples and a beautiful beach called Kamakura. Here you can visit the Daibutsu Great Buddha, wander through one of the many parks and walk along the beach and smell the fresh ocean air. This will prepare the groups for the their fourth and also last week of field research abroad. 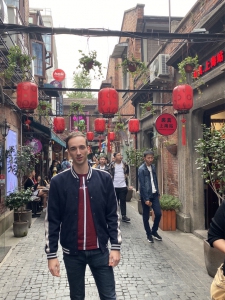 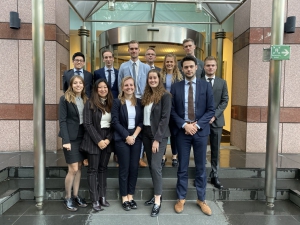