Today we will discuss one of our destinations, Shanghai, in further detail. Unlike our page “destinations”, where we note some basic points about the three cities, we will link those points to many other interesting facts about Shanghai. Both on a business and recreational level.

It is common knowledge that Shanghai has grown to be one of the world’s biggest economies over the last decades. With an average growth of 11%, it generates most of China’s total yearly revenue. Where China started off as the location for cheap labor, Shanghai quickly developed its “six pillar-industries”. These first (pillar-) industries were heavy demanding and polluting industries like petrochemicals and steel, causing them to switch to more high-tech industries. Over the years they have added and changed a couple of industries on the list until they reached the current list six industries, which are the information industry, financial services, like the Lujiazui Finance Trade Zone, commerce and trade, automobile manufacture, equipment assemblies and real estate. Other interesting industries at the moment are cheese, bakeries and agriculture.

Against expectations, Shanghai has the perfect ground for agriculture and the government continually emphasizes the importance of development of agricultural industries like planting, forestry and fisheries. Throughout the city there are many organized urban agricultural zones, which attract many foreign investments and advanced technologies. Additionally, Shanghai’s port is one of the largest ports in the world, heavily simplifying Shanghai’s import and export.

But not just on a business level, also on a cultural level there’s a lot to see in and around Shanghai. Being some of the biggest tourist attractions, most people are aware of the Shanghai Tower, The Bund and the Huangpu River. However, there are also many inspiring, creative and active sights around the city. The Jing’An sculpture park, Bouldering on the Bund, M50, Power Station of Art and the PPAM to name a few. 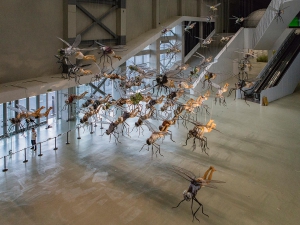 The Jing’An sculpture park is a small park in the middle of Shanghai’s shopping heart. With its many interesting sculptures and the realm of calmness dominating the park, it’s the perfect getaway for anyone in need to flee the busy city. Always wanted to climb underneath and next to Shanghai’s main waterway, ships of all sizes and the colossal, old cranes? The active people among us can find their luck in The Bund. No need to worry if you’re not that athletic, they offer routers for all different skill levels. Another place to flee the busy city life is within the old industrial heart of Shanghai, which over the years has transformed into the vibrant artistic metropolis, known as the M50. Have a stroll past the many little galleries and hidden cafes while enjoying your morning coffee. Or have a look at the Power Station of Art, if you want to see a bit more of China’s culture. The Power Station of Art is China’s first state-run contemporary museum of art, housed in a former power station, so a win-win culture-wise. Another definite go in this area is the Propaganda Poster Art Museum. This museum is a real catch with many propaganda outings from 1949 until the end of the cultural revolution in the late 1970’s. However, finding this museum is an activity in itself as it’s hidden away in a residential apartment.

As already mentioned, there are many reasons to travel to Shanghai, whether it’s for business or pleasure. Upcoming november, we, from TIME, will submerge ourselves in both while doing our absolute best researching varied cases of market research for Dutch companies.

There are still a couple of spots left, so if you feel like your company is facing some issues or simply up for a new challenge. Fill in the form via contact (link) or send us an email via info@time-tilburg.nl.