A lot of exciting things have happened lately and will happen for Japan. It started last June, when the G20 Summit took place in Osaka. It was the first time Japan took on presidency of the Summit since its existence. The G20 Summit consists of the 20 countries with biggest economies in the world and focuses on macroeconomics and trade, but also on a range of global issues affecting the global economy and world’s health.

Next November, Tokyo will host the Rugby World Championships and next year, in 2020, Japan will take on the Olympics. An exciting time for Japan. But we will further elaborate on these sports events when discussing Tokyo later this.

Also on an economic side, Osaka is doing well. The city is located in Kansai, a region in Japan and used to be Japan’s capital together with the cities Kyoto and Nara

Today, Osaka still has got one the country’s biggest economies, due to its large harbor and the amount of import and export following this. Just Osaka City accounted for almost 4% of Japan’s total GDP in 2017, while the whole region of Kansai accounted for 15%

Respectively, the GDP of Osaka City that year was approximately the same as that of New Zealand and that of Kansai was nearly as much as the Netherlands’ GDP.

Besides working, there’s also some time to relax and although Osaka is often forgot as a place to visit and travelling through Japan, which is a shame because there is so much to do, both inside and outside of the city.

One of the biggest attractions of Osaka is one almost everybody will be familiar with; Legoland. Yes Legoland is not only stationed in Denmark, but also in this Japanese City. And may I say it’s worth a taking a look. They’ve rebuilt entire cities and you can hop into several different lego attractions. Be aware that it is usually pretty crowded and it is focused on kids.

If you’re more into museums, the Osaka Science Museum and the Instant Ramen Museum are highly recommended. The Osaka Science Museum has been renovated only last March and is dedicated to space and energy. It’s interactive and a place when one and old could learn a thing or two. Ramen is probably a concept most of you will be familiar with, so how cool is a museum completely dedicated to this famous little snack. You can even create your own cup of ramen.

After these trips, you’ll probably be starving. Luckily there are more than enough places to eat whatever comes to mind in Osaka. The Street food in the Dotonbori district or Kuromon Ichiba market are popular places if you are longing some good Japanese food, as the name already suspects. However, if you’re in need of something a little closer to home, there are many other cafes as well throughout the city. Especially if you’ve got a sweet tooth, you will not be dissapointed. Pretty cool and completely different from these before mentioned places is the Owl Family Cafe, a place where you can have coffee in company of a bunch of owls.

In case you’re in need of something a little stronger, try some of Japan’s many whiskeys and beers. They’re delicious, different from the ones we know in the Netherlands and worth a try.

Although Osaka isn’t necessarily known for the best temples, doesn’t mean they aren’t around. Some cultural highlights are Osaka Castle, the Sumiyoshi Shrine or Hozenji Temple. Being built in 1583, the Osaka Castle is one of the oldest buildings in the city with a large garden, a museum on site and a great top viewing deck. The latter two are buddhist oriented locations, peaceful and extremely beautiful.

But whoever wants to leave a city for a little bit can visit both other parts of the former capital, Kyoto and Nara. They’re easily accessible and definitely worth a visit. Kyoto is mostly known for its temples, whereas Nara receives most visitors for the large amounts of deers walking around.

After discussing many indoor or more city-like activities, it’s time for some adventures in the wild, Both Minoh Waterfall and Mukogawa gorge are reasonably close to Osaka and very beautiful. And remember, both Osaka and its surroundings are extremely photogenic, so don’t forget to bring your camera. 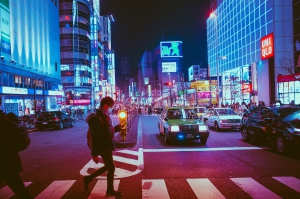 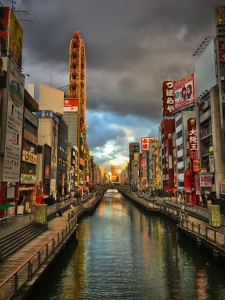